China Fishery closed at $1.26 (a critical support level) with a hammer today (a trend reversal). Looking at a bigger picture, China Fishery is forming a nice Elliott Wave (in blue) and currently is probably ended with Wave 4, and the hammer may indicate the start of Wave 5 (the biggest wave).
Coincidently, a smaller Elliott Wave (in red) is observed and probably at the end of Wave C currently. This ABC retracement is approximately at 61.8% Fibonacci Level.
Base on the chart pattern and candlestick, plus the healthy correction, China Fishery will probably go on a medium term bullish upside. 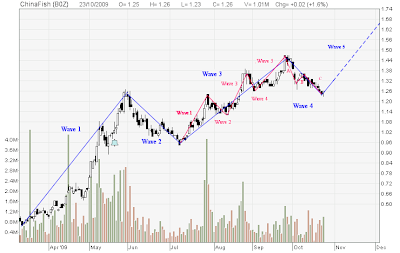 China Fishery: Down Trend Has Started