I am preparing to short (buy PUT option) Goldman Sachs (GS) & Apple (AAPL) if the charts pattern are confirmed bearish.

Goldman Sachs (GS) appears to be forming a Head & Shoulders pattern. I am waiting for the right shoulder to be formed. The stock has been on the up trend since Mar 2009 and is due for a healthy correction. The 50D MA provides a very strong support line as the stock price bounced back twice in beginning of July and early Sept. 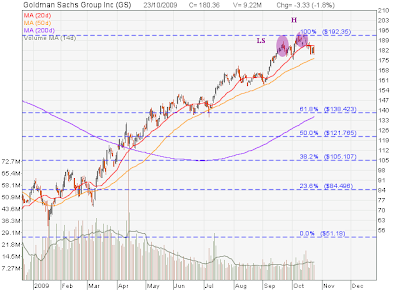 Things to watch out for GS:

Apple (AAPL) broke the 20D MA with a long bearish candle last Friday. The long term channel resistance which also coincides with its 50D MA trend line at about $185, is a critical support. Falling below this support could start the correction and see the price fall to $158.19 level (61.8% Fibonacci Retracement Level). Both MACD and RSI are bearish. MACD had confirmed its dead crossover and RSI broke its support trend line. 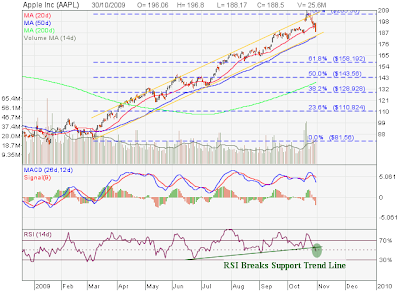 Things to watch out for AAPL:
Join the @REITirement Telegram Channel!

RIP Steve Jobs…. We Will Miss You!